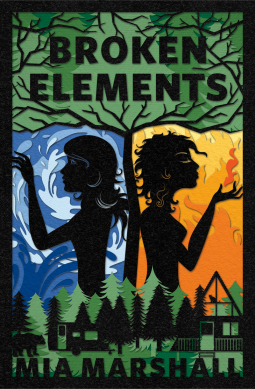 The fantasy genre is becoming my favourite genre, so I looked forward to reading this book. It did not disappoint. It is well written and the author uses clever language to explain her characters and their powers in a way that makes sense to the story line, and does not come acoss like a reference section!

Written in the first person the story follows Aidan Brook, a water elemental, who has lived in solitude for a decade. She left her old life in Lake Tahoe behind after she could not prevent the deaths of three people who got caught up in a murder spree her and her best friend, fire elemental Sera, were unwittingly caught up in.

But now Sera has found her and she has some terrible news to share; their mutual best friend, Chris, was murdered recently and his murder bears all the hallmarks of the killings ten years earlier.

The book follows Aidan and Sera as they link up with a couple of other elementals and a couple of shapeshifters all hell bent on finding the killer and bringing him to justice.
The book was a thrilling read and I found I could not put it down.

Early on in this book I thought to myself “I know who the killer is” but then dismissed my thought. Later on when the killer’s identity is revealed I discovered I had been right after all. That does not mean the author made it obvious who the killer is, I just had a gut feeling when I read a certain paragraph.

This book was a joy to read, compelling, thrilling and difficult to put down! Thoroughly recommend giving it a read – you certainly won’t be disappointed.