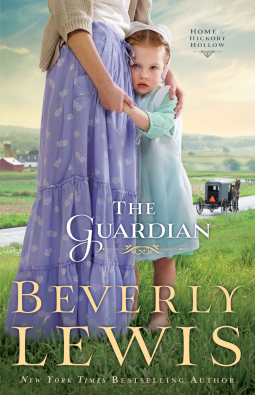 This lovely story is a Christian fiction novel – I was a bit dubious at first, being a Pagan I was uncertain to how much religion was going to be in the book.  I think it is fair to worry about such things when one does not follow the religion in a book, or is not religious at all.  After all, there are books in this genre that all but shove the religious aspect down the throat of the reader.

I have to admit I was pleasantly surprised at how much I enjoyed this story.  The author does not overwhelm the reader with religion, which made me want to keep reading.

The Guardian is about Jodi Winfield’s struggle with her belief in God.  The story begins with an Amish family returning home from a day out; the family – mother Maryanna, who is a widower, and her young children are travelling in a horse and cart when  the youngest child accidentally falls out of the cart.

The next morning whilst out for her morning run, Jodi stumbles across the child.  She fails to find out her identity as the child speaks no English at all.  Jodi imagines all sorts of scenarios that have led to a child as young as the one she found wandering about the open countryside in her under garments.

She rings her cousin, a local police officer who she is house sitting for and after telling him a few facts about the child he suggests she goes along to the nearby Amish community.  He is certain the child must have come from there, he explains that the Amish community are always reluctant to involve outsiders in their business so it is unlikely they will have alerted the police about her disappearance.

When Jodi returns the small girl, who she discovers is called Sarah, to her family in Hickory Hollow, a friendship begins between herself and the child and her family.  Maryanna, Sarah’s mother feels eternally grateful for Jodi bringing Sarah home, but is not sure she should be so friendly with an Englischer – the name the Amish community gives to non Amish people.  They soon become good friends when Jodi is invited to be the temporary teacher at the Amish school.

The book deals a lot with Jodi’s lapse in faith.  She lost her faith in God after her beloved sister died.  She has even vowed not to have children of her own, much to the dismay of her fiance, Trent.   Jodi just feels as though she is in a bad place; her sister died and she is struggling with her grief.  Her fiance is about to go to Japan for a year to teach English.  Then she loses her teaching job in Vermont.

Before I read this book I had noticed some of the reviews really slating this book because of the religious theme to it.  I do agree with one, in a way you are misled into believing that the story is a mystery, rather than a Christian themed happy-ever-after affair.  But if you can push your feelings about the religion aside you will find that you can empathise with Jodi as she struggles with her grief, her loss of faith and her place in the world.

I found the story to be more believable with the plot it has, rather than having the character go off on some wild, crazy adventure in order to find herself.  That Jodi was thrust amidst such a devout group of people made perfect sense.  She witnessed Maryanna’s struggles, bringing up four young children after the death of her husband and battling with her conscience with regards to her near neighbour – and deceased husband’s best friend, a widower – who is clearly smitten with her.

Having Jodi go off and be wild, crazy and spontaneous may have made for a better read for some people, but the fact that she was always going to rediscover her faith would have felt really out of place; this plot made much more sense.  All of the religious references were necessary to the plot and certainly were not over the top at all.

I would give this book 4 stars **** and can certainly recommend it for lovers of this genre, or for anyone looking for a pleasant read.