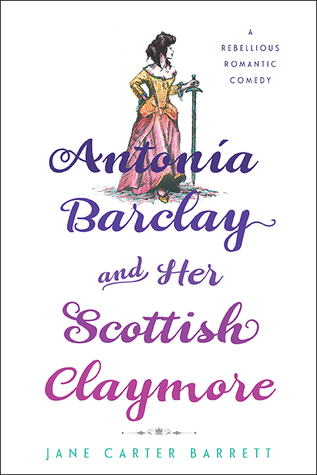 This novel has been dubbed “The Princess Bride meets Jane Austen”.

Antonia Barclay is a headstrong nineteen-year-old who lives in the Scottish Borders with her family.  The novel is set in 1586 but the author has added a modern twist to the tale by allowing her characters to use vocabulary that is more in keeping with this era.  This lends a lighter feel to the prose – quite often the narrative can be quite heavy when the story is set in this era and that can be quite off-putting for many readers.  The author has mixed the old with the new here and allowed the two to intermingle wonderfully.  At the very start of the novel the author makes a lighthearted pact with the reader, giving a gentle warning that all forms of social, political and fashion correctness will be overlooked in favour of frolic and adventure.

The novel is fun and unconventional, it really isn’t supposed to be taken seriously, so you really need to suspend your belief and just let the author’s words entertain you.  Antonia is quite a character, headstrong, determined, adventurous, she is an empowered young woman.  She is at an age where she is expected to be concentrating her time and efforts on activities such as harp playing, embroidery and finding a suitable husband.  Antonia would rather be riding her horse and spending time alone, but between her three brothers, her mother and her best friend she is cajoled into what they term as more womanly activities.  Antonia is a likeable character because she does not let society define her.  She knows her own mind and she’s not afraid to voice her opinion.

Antonia’s mother convinces her that she must attend an upcoming ball at a neighbouring estate and tells her she must also attend a dinner at their own home that evening.  The dinner is being held in honour of Sir Basil Throckmorton.  Just before dinner that evening, Antonia bumps into Sir Basil’s son, Rex, an overweight, overbearing, obnoxious oaf and he leers at her, makes lewd comments about her womanly shape and all but gropes her in the hallway.  This onslaught is interrupted by Breck Claymore, another guest at dinner that evening.  Breck saves Antonia from the disgusting Rex, and when their eyes meet it is love at first sight.  The action comes thick and fast from this point on.  Antonia and Breck begin officially courting after Breck has secured Lord and Lady Barclay’s permission to court their daughter.

Antonia discovers that her parents are not actually her real parents, but that she is the secret daughter of Mary Queen Of Scots who is imprisoned over the border in England.  The Throckmortons have also discovered this and Sir Basil plots to use Antonia against both Queen Mary and Queen Elizabeth, thus overthrowing King James of Scotland and Queen Elizabeth of England.  Sir Basil plans to prove Antonia is Queen Mary’s daughter and then marry her so that he can execute his plan to overthrow the Monarchs.

Once Antonia discovers that Queen Mary is her mother she takes off to find her, enlisting the help of a man named Gus.  Gus is the brother of Minne, Antonia’s nanny, both Gus and Minnie know the truth about Antonia’s parentage and have kept the secret for nineteen years.  But once the Throckmortons arrived on the scene Minnie knew Antonia’s life was in danger.

The novel is lighthearted and jolly.  Even when Antonia is kidnapped by the Throckmortons the author keeps the tone light and jolly.  This helps the story move along at a really good pace and adds a touch of humour to what could be an otherwise dark novel.

The book is very well written and the language the author uses is superb.  This book is for anyone who loves historical romances.  It may not be to everyone’s taste, maybe not even those who would normally read historical romance, because of the lighthearted comedy element that the book has.

This is not my usual read but I think it was a really enjoyable book and such a fun read.