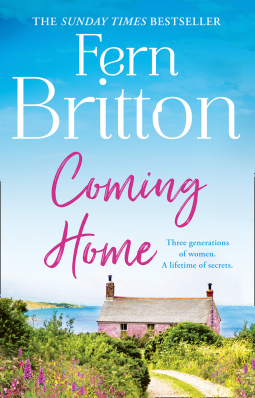 Coming Home follows the story of three generations of women from the Cornish town of Pendruggan. Ella – who returns to Cornwall following the death of her beloved Grandmother, Adela.  Sennen – who ran away from Cornwall twenty years earlier, leaving her mother Adela and her father, Bill, to care for her two young children  – Henry and Ella.  And Adela – the mother and grandmother who must deal with the emotional fallout that her daughter’s disappearance has on her husband and their grandchildren.

As the story unfolded I felt a mixture of emotions, anger towards Sennen for leaving her children behind, sympathy for Adela and Bill, who have to deal with their own emotions that their daughter running away has evoked, all the while caring for the two children Senna left behind. Dislike for the grown-up Henry, how different he is to his sister! Ella is instantly likeable, she is such an easy character to root for.

We met Ella in Fern Britton’s earlier novel, The Postcard, where she had just arrived in Pendruggan.  Coming Home delves much deeper into Ella’s early life and the reason behind her return to Cornwall. It explores her relationship with Henry, who really comes across as a spoilt brat, and her relationship with Kit goes from strength to strength.

In the book, we are introduced to Sennen, the mother of Ella and Henry.  We learn about her reasons for running away and discover where she has been for the past twenty years. As much as she angered me with her selfish actions, I did feel for her when she discovers that both of her parents are dead.

The book is quite thought-provoking, exploring teenage pregnancy and the gamut of emotions that many young mothers face. It is beautifully written and the characters and story are captivating. It’s very easy to get involved with the storyline and you find yourself rooting for at least one character.

With regards to Sennen, I felt that there are many loose ends with her character, which makes me wonder if Fern is planning to write Sennen’s story. Henry wasn’t as developed a character as I had thought he would be, but again, I wonder if we will get to read his story at a later date. I was particularly happy with the happy-ever-after that Ella and Kit got. Ella is such a lovely character and I really had hoped she would get everything that she had wished for.

Overall I found Coming Home to be a pleasant read with a strong storyline and believable characters. The book is very well written and grabs your attention right from the off.